VivaQuant is not anything like the dozen or so Minnesota businesses that have sought funding directly from small investors in the last few years, a list dominated by small craft brewers. VivaQuant doesnĺt aspire to be a successful small business. Read more >


VivaQuant will have an exhibit booth at the SOT 2018 meeting in San Antonio, Texas from March 12-14. Visit us in booth 1751 to discuss you preclinical or clinical ECG service needs and stop by our poster at location P196 titled Comparison of QT and JTp derived from Spatial Magnitude vs Single-Lead ECG in Beagle Dogs. The poster will be displayed on Monday March 12 with designated author attendance from 1:30-3pm.


VivaQuant announces the release of AE-1010 Rhythm Express Interval and Arrhythmia Analysis Software for use in research applications. Read more >


VivaQuant is celebrating eight years since its founding in 2009. Highlights from those eight years include... Read more >


The National Institutes of Health has awarded a Phase II SBIR grant to VivaQuant for development of a comfortable, accurate, and efficient wearable device for patients with atrial fibrillation. Read more >


Availability of implantable biotelemetry has played an important role in drug development and biomedical research. This technology has resulted in vastly improved information from research studies and has greatly contributed to reduction and refinement of laboratory animals used in research. Brian Brockway discusses the history of the field and how DSITM came to play a key role in democratizing the use of implantable biotelemetry in research. 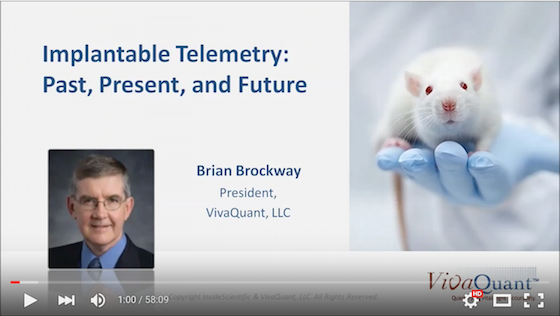 DSI is a registered trademark of Data Sciences International.


CTO Dr. Marina Brockway has led VivaQuantĺs efforts to develop an efficient and robust process for turning complex signal processing algorithms developed on Matlab into embedded code for efficient execution on an ARM Cortex microcomputing platform. Mathworks profiled VivaQuantĺs success in this endeavor in their newsletter, culminating with an invited presentation by Dr. Brockway at the Mathworks North American user group.


VivaQuant was presented with this prestigious award in recognition of the potential of its MDSP ECG processing technology to improve decision making in cardiac safety assessment of new drugs. Read more (external link) >
© 2020 VivaQuant, Inc. | Sitemap